Looking for an entry-level bowling ball or a ball that is not going to react strongly to the dry or oily parts of the lane? Then look no further than the Brunswick Rhino bowling ball. This line of bowling balls balances power and control by pairing the R-16 pearl reactive coverstock and a light bulb shaped core. 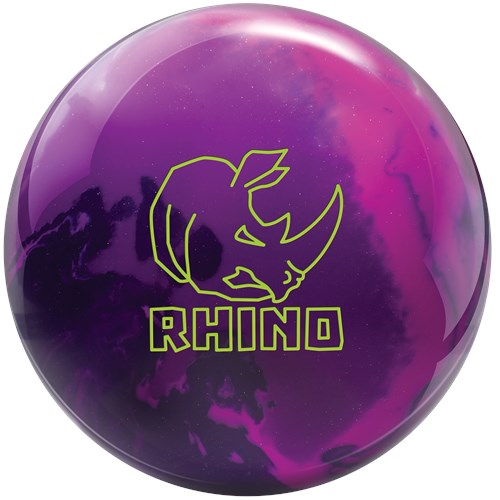 For beginners looking for their first ball all the way to advanced bowlers looking for a ball for when the lanes are dry, the Rhino is a great option. 5 color choices in all, 4 pearl and now a solid resin option with the Magenta/Purple/Navy. Using the trusty Light Bulb core and the R16 coverstock, both have been a staple with the Rhino line for years.

With the out of box surface of 500 and then finished with Crown Factory Compound and Crown Factory Polish, I chose a layout of 65x4.25x35 (the same as my Radical Bowling Technologies Counter Attack Solid) to help get the ball through the front part of the lane and not be too jumpy off of the dry. My intentions with the Rhino is to use this ball when the lanes are fried, especially on longer block format tournaments and on short oil patterns as well. I’ll give it a chance during league on a THS but probably not until later in the night …and this last year I was wonderfully set with the DV8 Verge Pearl as my closer.

The Rhino Magenta/Purple/Navy Solid really is a sharp looking ball and I’m digging the fact that Brunswick (and associated manufacturers) are starting to use sparkle in their additive packages as it totally adds to the shelf appeal in pro shops, your bowling bag, and on the ball return …and of course going down the lane and through the pins as well.

The Brunswick Rhino is a wonderful choice as a first ball for a beginner bowler and is in their Affordable/All Purpose range. You’ll get more performance with the Rhino line than the Twist line which is rated as Affordable/Control.

Technically all of the current Brunswick Rhino bowling balls have a R-16 Pearl Reactive. I think we may have some showing R-16 Reactive but they are all pearl.

Due to the time it takes to produce the Brunswick Rhino Magenta/Navy/Purple ball it will ship in immediately. We cannot ship this ball outside the United States.